“The whole scenery was like a prehistoric world, as I imagined it to be in my childhood dreams.”

Before crossing the Atlantic, we made our last stop in Cape Verde. Travelling and exploring new places are among my reasons to be in this industry. So I was thrilled to hear we would stop in such an exotic place! I have travelled to north-African countries like Egypt and Tunisia before, but this is my first time in a west-African country. So I really had no idea what to expect!

Some of my ex-colleagues from Holland went to Cape Verde for holidays. They raved about the beauty of the islands. One of them even had the idea to start a restaurant here. The crew who visited Cape Verde before, told me a completely different story though. They said to me it’s dirty, unsafe, and very poor. Both stories had some truth to it as it turned out.

Sailing into the archipelago was beautiful

Cape Verde is an archipelago made of 10 volcanic Islands, and was part of Portugal until 1975. Cape Verde has approximately 550.000 inhabitants of which 70.000 live on São Vicente, the island I was about to visit. We arrived on an early foggy morning. Sailing into the archipelago was beautiful and a bit mysterious. Large volcanic mountain peaks loomed trough the fine mist, the islands green and deserted. The whole scenery was like a prehistoric world as I imagined it to be in my childhood dreams. 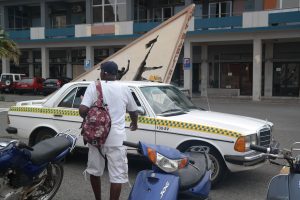 Once in the port it was quite hectic. Mindelo has a cruise ship terminal which is visited by a hundred cruise ships every year. We were welcomed by many locals, waiting on the dock’s to sell us homemade souvenirs, fish and other goods. I have travelled to underdeveloped countries before, so scenes like this are not new to me, I’ve never experienced this while on a yacht though.

The captain told us to get to the supermarket and buy only the absolute necessities, while they filled up the boat with fuel. On our way there we drove by some modern shops selling t-shirts, sun glasses and other stuff you can buy in every cruise ship port. The roads are in a bad condition and trash is everywhere. Our local fixer brought us to a supermarket. It’s was not bad, but fresh produce were really scares. Luckily I was already well prepared for our trip! After buying water, milk and some coffee we left the store and it became apparent to me how poor the Islands actually are. 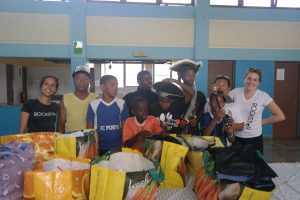 People started to follow us around asking for money or something eat. We had a lot of leftover food, uniforms and other stuff. So the idea emerged to donate it to a local orphanage. Our fixer brought us to one, not far from the port. Over 400 kids were housed and educated there. We brought them snacks, caps, shirts, shoes and a lot of stuff for a Halloween party, which happened to be the day after. It gave me such a good feeling, seeing this kids so happy with all these (to us) small things. I strongly recommend to save up all the stuff we yachties normally throw in the garbage, and donate it to the less fortunate. You will be rewarded with so much gratitude!

Our fixer told us to go and have a look in the local discotheque at night. He said is was fairly secure, because they don’t allow knives and guns inside (!?). Obviously this frightened the girls a little bit so we decided against it. After a good night rest (without any watch keeping duties) we were scheduled to continue our journey to Antigua. Unfortunately we had another setback, and needed parts to get some stuff fixed in the engine room. 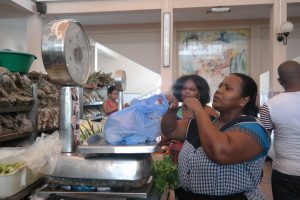 Luckily for me, this created an opportunity to visit a real local market. I heard about a typical south American vegetable market, in the centre of Mindelo. Which I really wanted to visit. I absolutely love local markets, it makes my chef’s heart beat a little faster. I didn’t get disappointed! The fruits and vegetables were of good quality and all sorts of fresh local grown products were on sale.

The shopping was quite hectic though, every vendor wanted to unload their merchandise on us. I ended up buying one of the most funny homemade souvenirs ever. Some drunk guy wanted me to buy his self-made painting. I told him I wasn’t interested, but after 5 minutes of harping I caved in and bought the whole lot. I definitely made his day and I got an one of a kind souvenir to remind me of Cape Verde! Next day we could finally start the Atlantic crossing!

I hope you enjoyed reading my first blogs. Keep up to date with my latest adventures and new story’s by following my instagram and facebook!

Read all about the first stops Tarifa, Gibraltar and Tenerife!

email
I hope to serve
you soon.